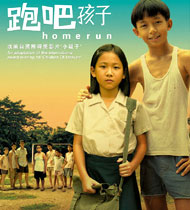 Homerun is a 2003 Singaporean Mandarin-language film. A remake of the award-winning Iranian film Children of Heaven, Homerun is a drama about two poor siblings and their adventures over a lost pair of shoes. Set in 1965, the year Singapore separated from Malaysia, the film satirises the political relations between the two countries, leading to its banning in Malaysia.

In 1965, two poor Singaporean children, Chew Kiat Kun (Shawn Lee) and his younger sister Seow Fang (Megan Zheng) live with their mother (Xiang Yun) who is late in her third pregnancy and their father (Huang Wenyong) who is in debt to a local rice merchant. The children make the best of what little they have, while their father works long hours doing odd jobs.