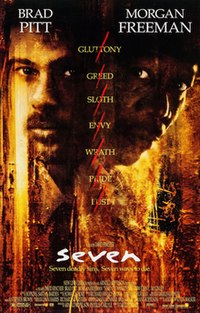 Seven (stylized as Se7en) is a 1995 American crime thriller film directed by David Fincher and written by Andrew Kevin Walker. It stars Brad Pitt, Morgan Freeman, Gwyneth Paltrow, and John C. McGinley. Set in a crime-ridden, unnamed city, Sevens plot follows disenchanted, near-retirement detective William Somerset (Freeman) and his new partner, the recently transferred David Mills (Pitt), as they attempt to stop a serial killer before he can complete a series of murders based on the seven deadly sins.

In a city overcome with violent crime and corruption, disillusioned police detective, William Somerset, is one week from retirement. He is partnered with David Mills, a short-tempered but idealistic detective who recently relocated to the city with his wife, Tracy. On Monday, Somerset and Mills investigate an obese man forced to eat until his stomach burst, killing him, and uncover the word "gluttony" written on the wall. Somerset fails to get himself and Mills reassigned to another case, believing it is too extreme for his last investigation. The following day, the second victim, greed, is found, having been forced to cut a pound of flesh from his body. Clues at the scene lead Somerset and Mills to the sloth victim, a drug-dealing pederast, who they find emaciated and restrained to a bed. Photographs reveal the victim was restrained for exactly one year. Somerset surmises that the murders are based on the seven deadly sins.