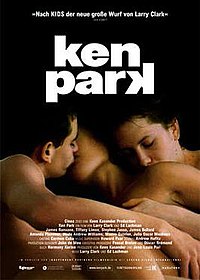 The title character, Ken Park (nicknamed "Krap Nek," with his first and last name spelled and pronounced backward), is a teenager skateboarding across Visalia, California. He arrives at a skate park, which he casually sits in the middle of, sets up a camcorder, smiles, and shoots himself in the temple with a handgun. His death is used to bookend the film, which follows the lives of four other teenagers who knew him in the weeks running up to his suicide.