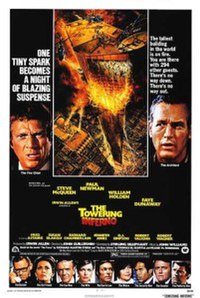 The Towering Inferno is a 1974 American disaster film directed by John Guillermin and produced by Irwin Allen, featuring an ensemble cast led by Paul Newman and Steve McQueen. It was adapted by Stirling Silliphant from the novels The Tower (1973) by Richard Martin Stern and The Glass Inferno (1974) by Thomas N. Scortia and Frank M. Robinson.

Architect Doug Roberts returns to San Francisco for the dedication of the Glass Tower, which he designed for developer James Duncan. The tower, tall and 138 stories, is the world's tallest building. During testing, an electrical short starts an undetected fire on the 81st floor just after another such short occurs in the main utility room. Upon learning this, Roberts sees the wiring is inadequate and suspects that Roger Simmons, the electrical subcontractor and Duncan's son-in-law, cut corners. Roberts confronts Simmons, who feigns innocence.