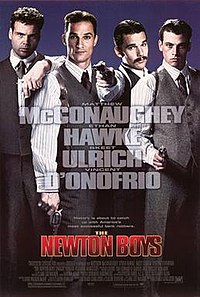 The Newton Boys is a 1998 American comedy-drama film co-written and directed by Richard Linklater. It is based on the true story of the Newton Gang, a family of bank robbers from Uvalde, Texas. The film stars Matthew McConaughey, who was actually born in Uvalde, Skeet Ulrich, Ethan Hawke, Vincent D'Onofrio, and Dwight Yoakam. It was filmed throughout Texas including the towns of Bertram, Austin, Bartlett, New Braunfels, and San Antonio.

A miscarriage of justice lands Willis Newton in prison, and he learns quickly that as a convict his only way up the social ladder is through having money. With two others, Slim and Glasscock, he carries out a bank robbery in broad daylight. Slim is caught when the three of them try to escape on horseback while the sheriff chases them in a car. Willis and Glasscock later find a bank director who buys the looted war bonds and sells them information on plenty of other banks. Henceforth, Willis and Glasscock rob banks at night and get away by car. Glasscock turns out to be an expert with nitroglycerin. Willis talks his brothers into supporting him. He tells them that bankers are the worst crooks of all and therefore robbing them of their money would only mean that little thieves are stealing from big thieves. He also says all banks are insured anyway and the insurance companies ought to be thankful because they would not be able to sell any insurance if there were no bank robberies.