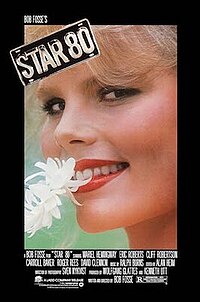 Star 80 is a 1983 American biographical drama film written and directed by Bob Fosse, adapted from the Pulitzer Prize-winning Village Voice article "Death of a Playmate" by Teresa Carpenter and based on Playboy model Dorothy Stratten, who was murdered by her husband Paul Snider in 1980. The film’s title is taken from one of Snider's vanity license plates.

In 1980, Dorothy Stratten lies dead as her husband rants to himself about the events that led up to this. Through a series of flashbacks which are interspersed by the murderer's rants, the story is told. Two years earlier, Stratten was working at a Dairy Queen in her hometown of Vancouver, British Columbia when she met Paul Snider, a brash small-time scam artist and pimp. Snider charms Stratten into letting him take her to her high school prom. He wins over Stratten with attention and flattery, getting her to pose nude for Polaroid photographs. Snider uses the photographs to persuade a professional to create a portfolio of her. Snider forges the signature of Stratten's mother on a consent form and sends the portfolio to Playboy. Playboy invites Stratten to Los Angeles to pose for a professional photographer.