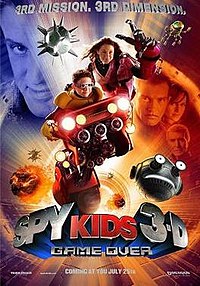 Spy Kids 3-D: Game Over (also known as Spy Kids 3: Game Over) is a 2003 American spy action comedy film, the sequel to Spy Kids 2: The Island of Lost Dreams, and the third installment overall in the Spy Kids franchise. Written and directed by Robert Rodriguez and co-produced by Elizabeth Avellán, it was released in the United States on July 25, 2003 by Dimension Films. The film stars Antonio Banderas, Carla Gugino, Alexa Vega, Daryl Sabara, Ricardo Montalbán, Holland Taylor, Sylvester Stallone, Mike Judge and Cheech Marin. Despite mixed reviews, the film grossed $197 million on a $38 million budget.

Juni Cortez has retired from the OSS, working as a private detective. He is contacted by US President Devlin, former head of the OSS, who informs him that his sister Carmen has vanished whilst on a mission. Juni arrives at the OSS, reuniting with a reformed Donnagon Giggles and his wife Francesca, who explains that Carmen was captured by the Toymaker, a former OSS informant. He was imprisoned in cyberspace years earlier, but has created Game Over, a virtual reality-based video game, which he intends on using to escape back to reality when a gamer wins the unbeatable Level 5. Juni agrees to go into Game Over, find Carmen, and stop the Toymaker.