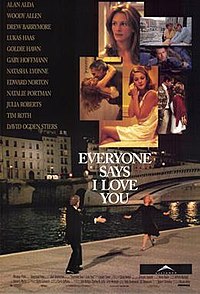 Everyone Says I Love You is a 1996 American musical film written and directed by Woody Allen. It stars Allen, Alan Alda, Drew Barrymore, Goldie Hawn, Edward Norton, Julia Roberts, Tim Roth, Natasha Lyonne and Natalie Portman. Set in New York City, Venice and Paris, it features singing by actors not usually known for musical roles. The film did not do well commercially, but is among the more critically successful of Allen's films, with Chicago Sun-Times critic Roger Ebert even ranking it as one of Allen's best.

The emotions of an extended upper-class family in Manhattan are followed in songs at New York, Paris and Venice. Various characters act, interact and sing in each cities. They include young lovers Holden and Skylar, Skylar's parents Bob and Steffi, Steffi's ex-husband Joe, Joe and Steffi's daughter Djuna, Von, a lady whom Joe meets, and a recently released prison inmate, Charles Ferry, who is inserted between them, leading to their breakup.