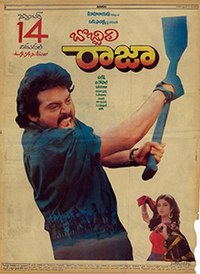 Bobbili Raja is a 1990 Indian Telugu-language romantic action film produced by D. Suresh under the Suresh Productions banner, directed by B. Gopal. It stars Venkatesh and Divya Bharati in the lead roles, with music composed by Ilaiyaraaja. It marks the debut of Divya Bharati. The film was recorded as a Sensational Blockbuster at the box office.

The film begins with election campaigning in the village Bobbili. Sundaraiyah (Gummadi) and Rajeswari Devi (Vanisree) are strong opponents in elections. Rajeswari and her elder brother Ahobala Rao (Kota Srinivasa Rao) play a lot of tactics to win the elections, but their younger brother Suryam (Vidya Sagar) supports Sundaraiyah and also loves his daughter Rajyalakshmi (Sumitra), and she becomes pregnant. Everybody dishonors her, and Ahobala wants to take an advantage of the situation in the election campaign. When Suryam decides to reveal the truth to everyone, Ahobala tries to stop him. In that quarrel, Suryam accidentally dies. Ahobala plays a game and keeps the blame on Sundaraiyah and Rajyalakshmi. Both of them are arrested, but they somehow escape from jail and reach a forest.