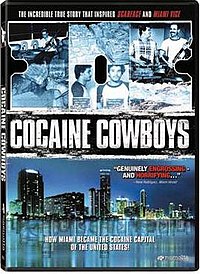 Cocaine Cowboys is a 2006 documentary film directed by Billy Corben, and produced by Alfred Spellman and Billy Corben through their Miami-based media studio Rakontur. The film explores the rise of cocaine and the Miami Drug War (the resulting crime epidemic that swept the American city of Miami, Florida, in the 1970s and 1980s). The producers of Cocaine Cowboys use interviews with law enforcers, journalists, lawyers, former drug smugglers, and gang members to provide a first-hand perspective of the Miami drug war.