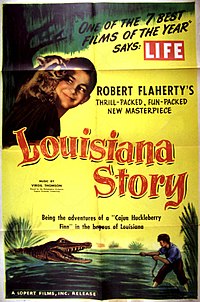 Louisiana Story is a 1948 American black-and-white drama film directed by Robert J. Flaherty. Although the events and characters depicted are fictional and the film was commissioned by the Standard Oil Company to promote its drilling ventures in the Louisiana bayous, it is often misidentified as a documentary film when in fact it is a docufiction. Its script was written by Frances H. Flaherty and Robert J. Flaherty.

The film deals with the adventures of a young Cajun boy and his pet raccoon, who live a somewhat idyllic existence playing in the bayous of Louisiana. A sub-plot involves his elderly father's allowing an oil company to drill for oil in the inlet that runs behind their house. A completely assembled miniature oil rig on a slender barge is towed into the inlet from connecting narrow waterways. Although there is a moment of crisis when the rig strikes a gas pocket, most of this is dealt with swiftly and off-camera, and the barge, rig, and friendly drillers depart expeditiously, leaving behind a phenomenally clean environment and a wealthy Cajun family.