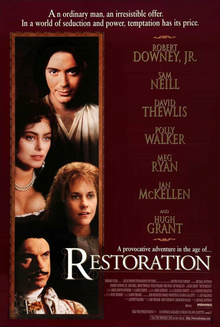 Restoration is a 1995 American historical drama film directed by Michael Hoffman. It stars Robert Downey Jr. as a 17th-century medical student exploited by King Charles II. The film, which is based on the novel of the same title by Rose Tremain, was filmed in Wales and won the Academy Awards for art direction and costume design.

A young doctor, Robert Merivel, enters the service of King Charles II of England after having saved the King's favorite spaniel. Merivel finds himself enjoying a life of debauched pleasure and popularity at court, until the King informs him that he has arranged for Merivel to wed Celia, the King's favorite mistress. The purpose of the arranged marriage is to fool another of the King's mistresses. Merivel is given an estate named Bidnold in Suffolk, and Celia is installed in a house in Kew where the king can visit her secretly. Merivel lives a life of debauchery there, but also finds pleasure in restoring the house to its former beauty with the support of Will Gates, the man who runs the estate. However, things become complicated when Merivel breaks the King's cardinal rule by falling in love with Celia. Elias Finn, a painter commissioned by the King to paint a portrait of Celia, tricks Merivel into revealing his romantic feelings for Celia, who does not return Merivel's affections. After finding out about Merivel's romantic feelings toward Celia, the King banishes him from court back to his life as a physician.