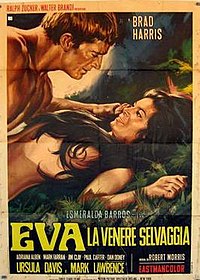 Kong Island (original Italian title: Eva, la Venere selvaggia; translated as Eva, the Savage Venus) is a 1968 jungle adventure film (with a science fiction element) directed by Roberto Mauri (billed as Robert Morris). The film was promoted in the U.S. as King of Kong Island.

The story takes place in the jungles of Kenya and its capital city Nairobi. Despite the title, there is no island (and no "Kong"). Mad scientist Albert Muller is experimenting with small radio transmitters implanted in the brains of gorillas that control their minds. These are test subjects with the ultimate goal of doing this to humans.