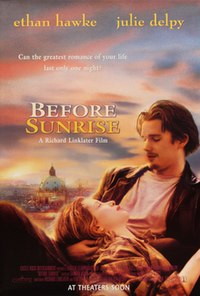 Before Sunrise is a 1995 romantic drama film directed by Richard Linklater and written by Linklater and Kim Krizan. The film follows Jesse (Ethan Hawke), a young American man, and Céline (Julie Delpy), a young French woman, who meet on a train and disembark in Vienna, where they spend the night walking around the city and getting to know and falling in love with each other.

On June 16, 1994, Jesse meets Céline on a train from Budapest, and they strike up a conversation. Jesse is going to Vienna to catch a flight back to the United States, whereas Céline is returning to university in Paris after visiting her grandmother. When they reach Vienna, Jesse asks Céline to disembark with him, saying that 10 or 20 years down the road, she might not be happy with her marriage and might wonder how her life would have been different if she had picked another guy, and this is a chance to realize that he himself is not that different from the rest; in his words, he is "the same boring, unmotivated guy." Jesse has to catch a flight early in the morning and does not have enough money to rent a room for the night, so they decide to roam around in Vienna.