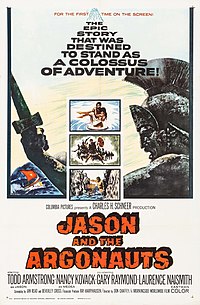 Jason and the Argonauts 1963

Pelias usurps the throne of Thessaly, killing King Aristo. A prophecy states that one of Aristo's children will avenge him. The infant Jason, Aristo's son, is spirited away by one of Aristo' soldiers. Pelias slays one of Aristo's daughters after she seeks sanctuary in the temple of the goddess Hera. Because the murder has profaned her temple, Hera becomes Jason's protector. She warns Pelias to beware of "a one-sandaled man".