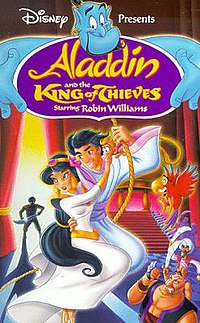 Aladdin and the King of Thieves 1996

Aladdin and the King of Thieves (also known as Aladdin 3: Aladdin and the King of Thieves) is a 1996 American direct-to-video animated musical fantasy adventure film produced by Walt Disney Television Animation. It is the second sequel to the 1992 film Aladdin, and serves as the final chapter of the Arabian Nights-inspired Disney franchise beginning with the first film, and continuing with its first direct-to-video sequel The Return of Jafar and the animated series of the same name.

As Aladdin and Princess Jasmine prepare for their marriage, Aladdin recovers a dagger, his only memento of his lost father, who had abandoned his family when Aladdin was a small child. During the ceremony, they and the assembled guests find themselves the targets of a raid by the infamous Forty Thieves, led by a man named Cassim, who is after a particular piece of treasure: a staff which is the receptacle of a powerful oracle. Aladdin, Abu, Jasmine and the Genie discover the Oracle, who has the power to answer a single question about absolutely anything to any individual. When Iago accidentally asks her why the thieves want the staff so badly, she says that they were looking for the "ultimate treasure". Learning of the Oracle's power, Aladdin becomes curious about his past. She hints to him that those questions can be answered by his father, who is still alive, much to Aladdin's shock. After some encouragement from Jasmine, Aladdin asks the oracle about his father; the oracle reveals that his father is with the Forty Thieves, "trapped within their world".