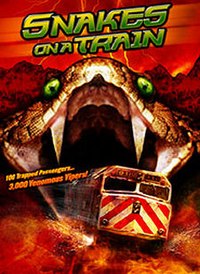 Snakes on a Train is a 2006 direct-to-video action thriller horror film released by The Asylum as a mockbuster on August 15, 2006. Aspects of the film are inspired by the film Snakes on a Plane, which was scheduled for theatrical release three days later on August 18, 2006.

Although taking the same basic idea from Snakes on a Plane (many deadly snakes loose on a claustrophobic, high-speed means of transport), the background story of how the snakes end up on the train differs.