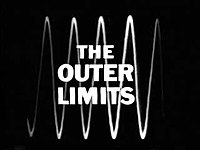 The Outer Limits is an American television series that was broadcast on ABC from September 16, 1963 to January 16, 1965 at 7:30PM Eastern Time on Mondays. The series is often compared to The Twilight Zone, but with a greater emphasis on science fiction stories (rather than stories of fantasy or the supernatural matters). The Outer Limits is an anthology of self-contained episodes, sometimes with a plot twist at the end.