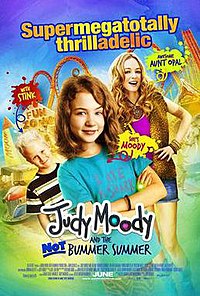 Judy Moody and the Not Bummer Summer 2011

Judy Moody and the Not Bummer Summer is a 2011 American comedy film based on Megan McDonald's Judy Moody book series released on June 10, 2011 and starring Heather Graham, Preston Bailey, Taylar Hender, Jaleel White, and introducing Jordana Beatty as Judy Moody. Reviews were generally negative, as the film holds a 19% rating from Rotten Tomatoes. It was also a box office bomb, grossing $17 million against a production budget of $20 million.

Feisty third-grader, Judy Moody, sets out to have the most thrilling summer of her life. However, her parents (Kristoffer Winters and Janet Varney) travel to California to assist Judy's grandparents, with Judy and her brother Stink (Parris Mosteller) being supervised by their aunt Opal (Heather Graham). Judy decides to organize a contest with her friends to see who can have the most exciting summer by earning "thrill points". At the start of summer, her friends leave except for Frank (Preston Bailey). Amy is going to Borneo and Rocky is going to Circus Camp. Her friends send her pictures of their summer, so Judy tries to top them, but Frank ruins all her plans by knocking her off a tight rope, vomiting all over her on a roller coaster, and leaving the theater in the middle of a scary movie. After her ideas go wrong, she decides to stay in her room for the rest of the summer, until she hears the newscast in front of her house. She looks out of the window and discovers that Stink is going to be on the news, because of his search for Bigfoot. She attempts to be part of the story but the camera crew stop the cameras from filming her.