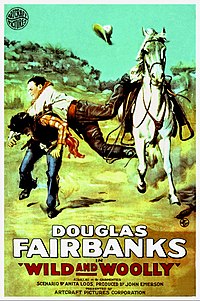 Wild and Woolly is a 1917 American silent Western comedy film which tells the story of one man's personal odyssey from cowboy-obsessed Easterner to Western tough guy. It stars Douglas Fairbanks, Eileen Percy, Walter Bytell and Sam De Grasse. The film was adapted by Anita Loos from a story by Horace B. Carpenter and was directed by John Emerson.

As described in a film magazine review, Jeff Hillington (Fairbanks), son of railroad magnate Collis J. Hillington (Bytell), tires of the East and longs for the wild and woolly West. He has his apartment and office fixed up in his understanding of the accepted Western style, which he has gleaned from dime novels. A delegation from Bitter Creek comes to New York City seeking financial backing for the construction of a spur line, and go to Collis to explain their proposition. Collis sends Jeff to investigate. The citizens of Bitter Creek, Arizona, realizing that a favorable report from Jeff is necessary, decide to live up to Jeff's idea of a Western town. They set up a program with a wild reception for Jeff, a barroom dance, and a train holdup. Steve Shelby (De Grasse), a grafting Indian agent, knowing that he is about to be caught by the government, decides to do "one more trick" and enters into the plan to rob the train, turning it into a real scheme. Events turn earnest and Shelby kidnaps Nell Larabee (Percy), with whom Jeff has fallen in love. The entire crowd has been trapped in the dance hall, which is surrounded by Indians, and Jeff's revolver loaded with blanks. When the situation is finally explained to Jeff, by superhuman efforts (and typical Fairbanks surprises) he rounds up the Indians, rescues the girl, completely foils the scheme of Steve, and becomes the hero of the hour, getting to marry Nell.