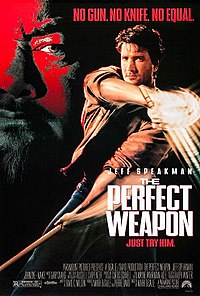 The Perfect Weapon is a 1991 martial arts action film directed by Mark DiSalle and starring Jeff Speakman, Mako Iwamatsu, James Hong, and Cary-Hiroyuki Tagawa. Set in Los Angeles, the film relates the story of a young man (Speakman), who is trained in the martial art of American Kenpo, and his fight against the Korean mafia.

Jeff Sanders (Jeff Speakman) leads a double life of sorts: by day, he is a simple, unassuming construction worker, and by night, an expert Kenpo student and master of his craft.