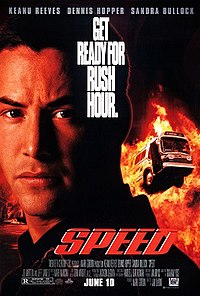 Speed is a 1994 American action thriller film directed by Jan de Bont in his feature film directorial debut. The film stars Keanu Reeves, Dennis Hopper, Sandra Bullock, Joe Morton, and Jeff Daniels. Its premise revolves around a bus that is rigged by a terrorist to explode if its speed falls below 50 miles per hour.

LAPD SWAT bomb disposal officers Jack Traven and Harry Temple thwart an attempt to hold an elevator full of people for a $3million ransom by an extortionist bomber, later identified as Howard Payne. As they corner Payne, he takes Harry hostage. Jack intentionally shoots Harry in the leg, forcing the bomber to release him. Payne flees and detonates the bomb, seemingly dying. Jack and Harry are praised by Lieutenant "Mac" McMahon, with Harry being promoted. Having survived the incident, however, Payne watches from afar. The next morning, Jack witnesses a mass transit bus explode from a bomb planted by Payne, who contacts Jack on a nearby payphone, explaining that a similar bomb is rigged on another bus, which will activate once it reaches and detonate if it drops below 50.