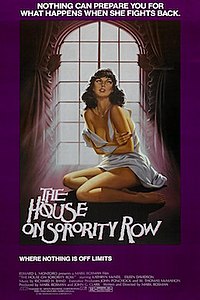 The House on Sorority Row 1982

The House on Sorority Row (also known as House of Evil in the United Kingdom) is a 1982 American slasher film written and directed by Mark Rosman, produced by John G. Clark, and starring Eileen Davidson and Kathryn McNeil. The plot follows a group of sorority sisters being stalked and murdered during their graduation party after they conceal a fatal prank against their house mother.

Seven sorority sisters Katey, Vicki, Liz, Jeanie, Diane, Morgan, and Stevie celebrate their graduation ceremony at their sorority house, located at the far end of a sorority row. Their celebration is interrupted by their domineering house mother, Mrs. Slater, who denies the girls' plan to throw a graduation party. The girls, led by Vicki—scorned because Slater slashed her waterbed when Vicki covertly brought a boyfriend into the sorority house—devise a prank: They steal her walking cane and place it in the house's unused outdoor pool and force her at gunpoint to retrieve it. The prank goes awry when Vicki inadvertently shoots Slater, who appears to be dead. The girls agree to hide the body in the pool until their party ends, though Katey and Jeanie are reluctant.