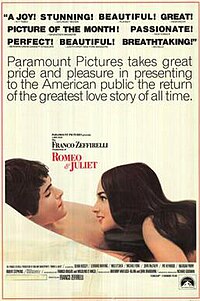 Romeo and Juliet is a 1968 period romantic tragedy film based on the play of the same name by William Shakespeare.Directed and co-written by Franco Zeffirelli, and stars Leonard Whiting as Romeo and Olivia Hussey as Juliet. Laurence Olivier spoke the film's prologue and epilogue and dubs the voice of the actor playing Lord Montague, but was not credited in the film. The cast also stars Milo O'Shea, Michael York, and John McEnery.

One summer morning in Verona, Veneto, a longstanding feud between the Montague and the Capulet clans breaks out in a street brawl. The brawl is broken up by the Prince, who warns both families that any future violence between them will result in harsh consequences. That night, two teenagers of the two families—Romeo and Juliet—meet at a Capulet masked ball and become deeply infatuated. Later, Romeo stumbles into the secluded garden under Juliet's bedroom balcony and the two exchange impassioned pledges. They are secretly married the next day by Romeo's confessor and father figure, Friar Laurence, with the assistance of Juliet's nurse.