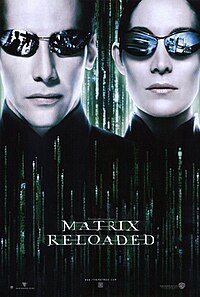 The Matrix Reloaded is a 2003 American science-fiction action film written and directed by the Wachowskis. It is a sequel to The Matrix (1999) and the second installment in the Matrix film series. The film stars Keanu Reeves, Laurence Fishburne, Carrie-Anne Moss, Hugo Weaving and Gloria Foster who reprise their roles from the previous film, while Jada Pinkett Smith was introduced in the cast.

Six months after the events of The Matrix, Neo and Trinity are now romantically involved. Morpheus receives a message from Captain Niobe of the Logos calling an emergency meeting of all ships of Zion. An army of Sentinels is tunneling towards Zion and will reach it within 72 hours. Commander Lock orders all ships to return to Zion to prepare, but Morpheus asks one ship to remain to contact the Oracle. Within the Matrix, the lone ship's crew is encountered by the former Agent Smith, who copies himself over the body of crew member Bane and uses the phone line to leave the Matrix.