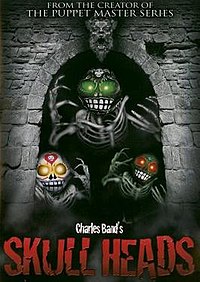 Skull Heads is a 2009 drama/horror film written, produced and directed by Charles Band and distributed by his company Full Moon Features. The film revolves around an emotionally backward young woman who lives in a castle in Italy with her mother and her aggressive father, along with a dark secret hidden within the castle.

The film begins with Naomi Arkoff (Robin Sydney) being taken by her father Carver Arkoff (Steve Kramer) into the basement of their castle home in Rome, Italy, where there lies a rack. Carver ties Naomi to both ends of the rack and turns the wheel, hurting her. Carver claims that her punishment this time is for having a cell phone, which was against the father's wishes. After begging her father to let her go, Carver unties her, but warns her that the next time she has a cellphone in the house, her punishment is not going to be slow and painful. As she gets released, she runs off upstairs, strangely screaming: "I can run faster than you!" over and over again.