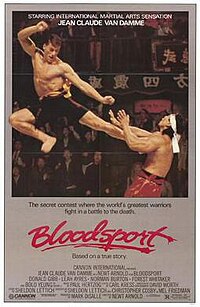 Bloodsport is a 1988 American martial arts action film directed by Newt Arnold. It stars Jean-Claude Van Damme, Donald Gibb, Leah Ayres, and Bolo Yeung. The film is partly based on unverified claims made by martial artist Frank Dux. It sold well at the box office, grossing $50million on a budget of $1.5–2.3million. Bloodsport was one of Van Damme's first starring films and showcased his athletic abilities. It has since become a cult film.

U.S. Army Captain Frank Dux (Jean-Claude Van Damme) has trained in the ways of ninjutsu under his sensei Senzo Tanaka (Roy Chiao). As a boy, Dux and a group of his friends broke into Tanaka's home to steal a katana, but Dux was apprehended while returning the katana to its place. Impressed by Dux's integrity and toughness, Senzo decided to train him alongside his son, Shingo (Sean Ward). After Shingo's death, Senzo trains Dux as a member of the Tanaka clan. Dux is invited to the Kumite, an illegal martial arts tournament in Hong Kong. After his Army superiors refuse to let him go, Dux goes absent without leave, says goodbye to his sensei and leaves for Hong Kong. Two Criminal Investigation Command officers, Helmer (Norman Burton) and Rawlins (Forest Whitaker), are assigned to track down and arrest Dux.