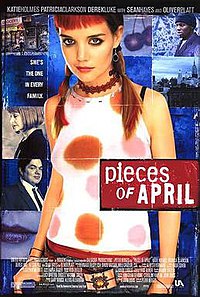 April Burns, the eldest daughter in a highly dysfunctional family, lives in a small tenement apartment on the Lower East Side of Manhattan with her boyfriend Bobby. Although estranged from her parents, Jim and Joy, and younger siblings Beth and Timmy, she opts to invite them for Thanksgiving dinner. It is expected to be the last Thanksgiving for Joy, who is dying from breast cancer.