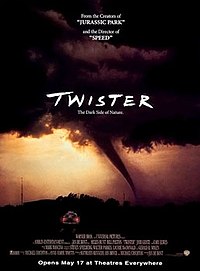 Twister is a 1996 American disaster adventure film directed by Jan de Bont from a screenplay by Michael Crichton and Anne-Marie Martin. It was executive produced by Steven Spielberg, Walter Parkes, Laurie MacDonald, and Gerald R. Molen. The film stars Helen Hunt, Bill Paxton, Jami Gertz and Cary Elwes, and focuses on a group of storm chasers trying to deploy a tornado research device during a severe outbreak in Oklahoma.

In June 1969, in western Oklahoma, the father of 5-year old Jo Thornton awakens Jo, her mother, and family dog Toby to warn them of an approaching F5 tornado. The family seeks refuge in their storm cellar, but while attempting to hold it down, the tornado—which obliterates their home—rips the cellar door off, pulling Jo's father to his death inside the vortex.