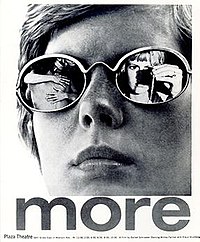 More is a 1969 English-language romantic drama film written and directed by Barbet Schroeder in his directorial debut. Starring Mimsy Farmer and Klaus Grünberg, the film deals with heroin addiction as drug fascination on the island of Ibiza, Spain. Made in the political fallout of the 1960s counterculture,

In West Germany in the late 1960s, Stefan has finished his mathematics studies and decides to experience life. Hitch-hiking to Paris, he is befriended by a petty criminal called Charlie, who takes him to a party where he is fascinated by an American girl called Estelle. Though Charlie warns him that she is a drug user and dangerous, he goes to her hotel room, where she introduces him to marijuana and they make love.