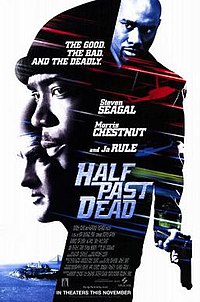 Half Past Dead is a 2002 American action film written and directed by Don Michael Paul in his directorial debut, and produced by Steven Seagal, who also starred in the lead role, alongside Andrew Stevens and Elie Samaha. The film co-stars Morris Chestnut, Ja Rule, Tony Plana, Kurupt, and Nia Peeples. The film tells the story of a criminal who infiltrates a prison to interrogate a prisoner about the location of a fortune in gold while an undercover FBI agent has to stop him. Distribution and copyrights are held by Columbia Pictures. Half Past Dead was released on November 15, 2002 by Screen Gems. The film grossed $19 million worldwide against its budget of $25 million.