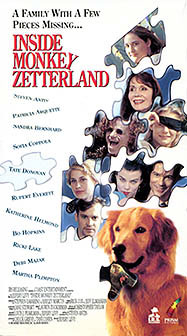 Inside Monkey Zetterland is a 1992 independent film written by the former child actor Steve Antin.

A struggling former child actor and now-adult screenwriter, "Monkey" Zetterland is working on a historical screenplay based around the defunct Red Car subway of Los Angeles. He lives in a building owned by his neurotic mother Honor Zetterland, who is a famous soap opera star. Secretly hoping there is a future in acting for Monkey, she is trying to turn her other son, Brent Zetterland, a hairdresser, into a film star.