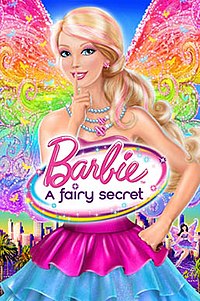 Barbie: A Fairy Secret is a 2011 American - Canadian direct-to-DVD computer-animated comedy fantasy film and the 19th entry in the Barbie film series. It was released in cinemas created by Cinedigm on February 22, 2011, and on March 15, 2011 on DVD.

Barbie is at the premiere of her latest movie along with her actor friend Ken, when her rival and co-star, Raquelle, steps on her dress, ripping it. Her stylists, Carrie and Taylor, who are secretly fairies, use magic to mend it. Crystal, a photographer, greets Carrie and Taylor and, taking one last picture of Ken, leaves to go back to Gloss Angeles. Crystal shows Princess Graciella the pictures she took at the premiere. She gives the Princess some tea in which she secretly mixed a love potion. Due to the potion's effects, her eyes color changes from blue to purple. Crystal then shows the Princess the picture of Ken she took, and Graciella falls in love with him almost instantly.