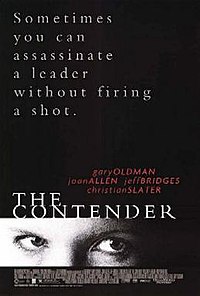 The Contender is a 2000 American political drama film written and directed by Rod Lurie. It stars Gary Oldman, Joan Allen, Jeff Bridges and Christian Slater. The film focuses on a fictional United States President (played by Bridges) and the events surrounding his appointment of a new Vice President (Allen).

Second-term Democratic U.S. President Jackson Evans must select a new Vice President following the sudden death of his vice president, Troy Ellard. The obvious choice seems to be Virginia Governor Jack Hathaway, who is hailed as a hero after he recently dove into a lake in a failed attempt to save a drowning girl. The President instead decides that his "swan song" will be helping to break the glass ceiling by nominating Ohio Senator Laine Hanson. In accordance with the 25th Amendment to the Constitution, approval from both houses of Congress is required. Standing in her way is Republican Congressman Sheldon Runyon of Illinois, who believes she is unqualified for the position, and backs Hathaway for the nod. His investigation into her background turns up an incident where she was apparently photographed participating in a drunken orgy as part of a sorority initiation. He is joined in his opposition by Democratic Representative Reginald Webster.