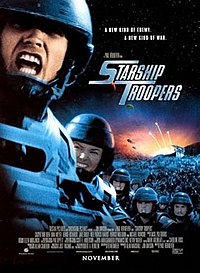 Starship Troopers is a 1997 American military science fiction action film directed by Paul Verhoeven and written by Edward Neumeier, based on Robert A. Heinlein's 1959 novel of the same name. The story follows a young soldier named Johnny Rico and his exploits in the Mobile Infantry, a futuristic military unit. Rico's military career progresses from recruit, to non-commissioned officer, and finally to officer, against the backdrop of an interstellar war between mankind and an insectoid species known as Arachnids.

In the 23rd century, while colonizing new planets, humans have encountered a hostile non-technological insectoid species known as Arachnids, but commonly referred to as "Bugs". The Bugs appear to be little more than savage, unrelenting killing machines, though there are suggestions that they were provoked by the intrusion of humans into their habitats.