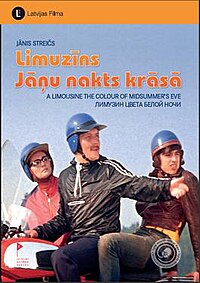 A Limousine The Colour Of Midsummer's Eve (Latvian: Limuzīns Jāņu nakts krāsā) is a 1981 Latvian TV-film, a comedy directed by Jānis Streičs. Movie was produced by Rīgas kinostudija. The film was awarded the Latvian National Film Prize Lielais Kristaps in 1981. The film is included into Latvian Cultural Canon, and voted all-time best Latvian film in popular vote. It is shown every year on TV prior to the summer solstice festival of Jāņi, which is a national holiday in Latvia. The movie is about the struggle of two related families for the eighty-year-old aunt's inheritance through comic and romantic events.

The movie begins when old auntie Mirta (Mirta Saknīte) succeeds in a lottery and wins a car which every Soviet citizen longs for – a Zhiguli car. Because of her old age, she cannot use the car herself. And when the word spreads out about her luck, different family members all of the sudden come to her countryside house to 'be helpful' in favour to get the car after aunt's death. Mirta's nephew Ēriks with his wife Dagnija and their son Uģis decided to give up their holiday to Carpathian Mountains just to lay their hands on aunties' legacy. Not only Mirta's nephew decided to surprise her with his arrival but her ex - daughter- in - law Olita together with her new family including her new husband Viktors and their offspring Lāsma.