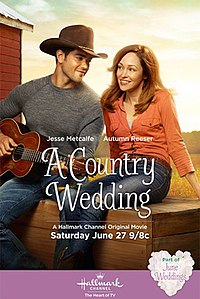 A Country Wedding is a 2015 American-Canadian made-for-television romantic drama film directed by Anne Wheeler and starring Jesse Metcalfe, Autumn Reeser, and Lauren Holly. It premiered on Hallmark Channel on June 27, 2015.

A few weeks before his very glamorous wedding to a famous actress, a country music singer returns to the small town in Texas where he grew up to sell his family's old house. There, he meets his childhood friend, Sarah, a cowgirl who owns a small ranch. With her, he rediscovers the joy of the simple things in life that he had forgotten.