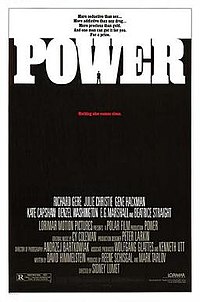 Power is a 1986 American political drama film directed by Sidney Lumet and starring Richard Gere. The original screenplay by David Himmelstein focuses on political corruption and how power affects both those who wield it and the people they try to control.

Pete St. John (Richard Gere), a ruthless and highly successful media consultant, is juggling a couple of political candidates when he is asked to join the campaign of wealthy but little-known businessman Jerome Cade (J.T. Walsh), who hopes to win the Senate seat being vacated by St. John's friend Sam Hastings (E.G. Marshall).