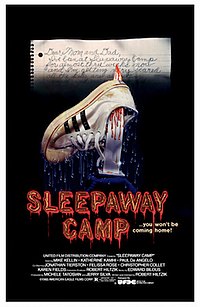 Sleepaway Camp (released as Nightmare Vacation in the United Kingdom) is a 1983 American slasher film written and directed by Robert Hiltzik, who also served as executive producer. It is the first film in the Sleepaway Camp film series, and tells the story of a young girl sent to a summer camp that becomes the site of a series of murders shortly after her arrival. It stars Felissa Rose, Katherine Kamhi, Paul DeAngelo, Mike Kellin (in his last screen appearance), and Christopher Collet (in his first).

Over the opening credits, the camera pans over a deserted campsite in autumn, as sounds of camp activities during the summer are heard. Eventually, it comes to a stop on a sign outside the campsite: "CAMP ARAWAK—FOR SALE".