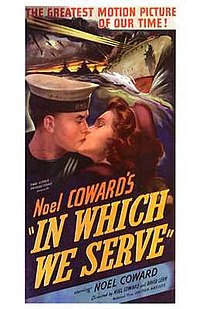 In Which We Serve is a 1942 British patriotic war film directed by Noël Coward and David Lean. It was made during the Second World War with the assistance of the Ministry of Information.

The film opens with the narration: "This is the story of a ship". In 1941, HMS Torrin engages German transports in a night-time action during the Battle of Crete. But at dawn, the destroyer comes under attack from German bombers. A critical hit forces the crew to abandon ship as it rapidly capsizes. Some of the officers and ratings manage to find a Carley float while being intermittently strafed by passing German planes.