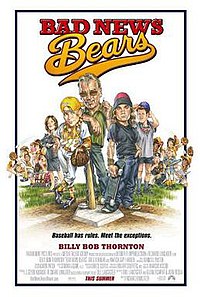 Morris Buttermaker (Billy Bob Thornton) is a washed-up alcoholic baseball player who was a pitcher for the Seattle Mariners before getting kicked out of professional baseball for attacking an umpire. He works as an exterminator and is a crude womanizer. He is hired by Liz Whitewood to coach the Bears, a children's baseball team with poor playing skills. They play their first game and do not even make an out before he forfeits the game. The entire team decides to quit after but Buttermaker forces them out of quitting and promises to be a better coach.