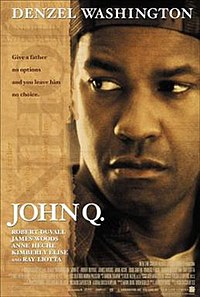 John Q. is a 2002 American thriller drama film starring Denzel Washington and directed by Nick Cassavetes. The film tells the story of John Quincy Archibald (Denzel Washington), a father and husband whose son is diagnosed with an enlarged heart and who finds out he is unable to receive a transplant because HMO insurance will not cover it, before he decides to hold up the hospital and force them to do it.

A motorist is driving dangerously down a winding road, recklessly passing cars until she comes upon a slow moving Mack truck. As she attempts to pass, her car is clipped by a truck going in the opposite direction, then slammed full-force by the Mack truck, killing her in the process.