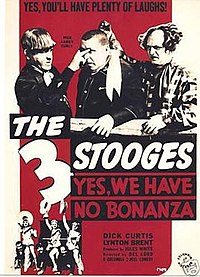 Yes, We Have No Bonanza is a 1939 short subject directed by Del Lord starring American slapstick comedy team The Three Stooges (Moe Howard, Larry Fine and Curly Howard). It is the 39th entry in the series released by Columbia Pictures starring the comedians, who released 190 shorts for the studio between 1934 and 1959.

The Stooges are singing waiters in a saloon out West, accompanied by three cowgirls. Unfortunately, saloon keeper Maxey (Dick Curtis) is surly and patronizing to the hard working girls. The girls have little choice, as they are forced to work for him because their father is in debt. The Stooges vow to make enough money to pay off the debt and wed the girls, and decide to go prospecting for gold.