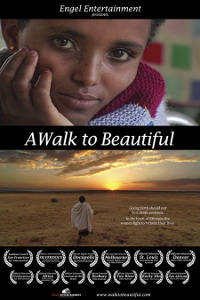 A Walk to Beautiful is a 2007 American documentary film, executive produced by Steven M. Engel and Helen Diana ("Heidi") Reavis, produced and distributed by Engel Entertainment, about women who suffer from childbirth injuries in Ethiopia. In 2007, it premiered in film festivals and was chosen for the International Documentary Association Best Feature Documentary Film of the Year award. The following year, the film opened in theaters in the United States in New York, Los Angeles, and San Francisco. A 52-minute version of A Walk to Beautiful that premiered on NOVA on PBS on May 13, 2008, won the 2009 Emmy Award in the Outstanding Informational Programming (Long Form) category on September 21, 2009, at the News and Documentary Emmy Awards ceremony on September 21, 2009, at Rose Hall, Lincoln Center in New York City.

A Walk to Beautiful tells the stories of five women in Ethiopia who are ostracized by their family and villages due to their suffering from obstetric fistula, a serious medical condition caused by failed childbirth under conditions of insurmountable poverty and inadequate health care. These women live in isolation with a sense of loneliness and shame due to rejection by their own. Each of these five women chose to reclaim her life by taking the long and exhausting journey to the Addis Ababa Fistula Hospital, so she could receive the medical treatment available only there. Upon arriving at the hospital, the women are treated free of charge, resulting in new beginnings. Not every patient can be cured, but each woman takes her own journey toward becoming an independent and productive member of her community once again.