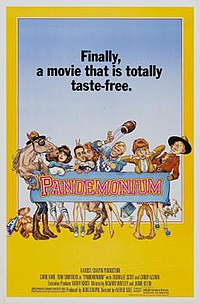 In the fictional town of It Had To Be, Indiana, fullback Blue Grange scores the winning touchdown for It Had To Be University in the 1963 National Championship game. Afterwards, a shunned cheerleader named Bambi is seen fawning over Grange's locker before the on-field celebration pours into the locker room. As a group of cheerleaders are cleaning up the field after the game, all five are skewered with a javelin thrown by an unknown assailant. The bizarre murder makes headlines, as does a subsequent murder involving exploding pompons. As a result, the college's summer cheerleading camp is closed down. In 1982, the camp reopens with Bambi as the instructor. After arriving on campus, she meets Pepe the maintenance man and his mother Salt. Both warn her against reopening the camp as they believe it to be cursed with death, but Bambi is undeterred.