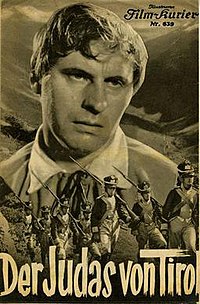 The Judas of Tyrol is a 1933 German historical drama film directed by Franz Osten and starring Fritz Rasp, Camilla Spira, and Marianne Hoppe.

The film is set in the early nineteenth century, when the Tyrol was under foreign occupation. The Tyrolean folk hero Andreas Hofer hides in the village of St Leonhardt, whose residents are preparing to stage their annual Passion Play. The film focuses on Raffl, a young farmhand cast in the role of Judas. Raffl gradually loses the ability to distinguish between role and reality.