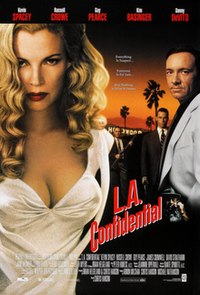 L.A. Confidential is a 1997 American neo-noir crime film directed, produced and co-written by Curtis Hanson. The screenplay by Hanson and Brian Helgeland is based on James Ellroy's 1990 novel of the same name, the third book in his L.A. Quartet series. The film tells the story of a group of LAPD officers in 1953, and the intersection of police corruption and Hollywood celebrity. The title refers to the 1950s scandal magazine Confidential, portrayed in the film as Hush-Hush.

In early 1950s Los Angeles, LAPD Sergeant Edmund "Ed" Exley is determined to live up to the reputation of his father, famed detective Preston Exley, who was killed by an unknown assailant whom Exley nicknamed "Rollo Tomasi". Already isolated from other officers by his intelligence and career ambitions, he volunteers to testify against them in the "Bloody Christmas" case in exchange for promotion to Detective Lieutenant, against the advice of precinct captain Dudley Smith.