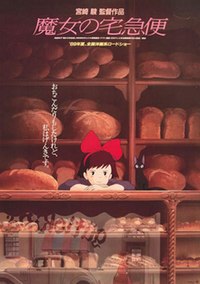 is a 1989 Japanese animated film written, produced, and directed by Hayao Miyazaki, adapted from the 1985 novel by Eiko Kadono. It was animated by Studio Ghibli for Tokuma Shoten, Yamato Transport and the Nippon Television Network and distributed by the Toei Company. The film tells the story of a young witch, Kiki, who moves to a new town and uses her flying ability to earn a living. According to Miyazaki, the movie portrays the gulf between independence and reliance in teenage Japanese girls.

As is traditional for trainee witches, thirteen-year-old Kiki leaves home with her black cat named Jiji, with whom she talks. She flies on her broomstick to the port city of Koriko. While searching for somewhere to live, Kiki is pursued by Tombo, a geeky boy obsessed with aviation who admires her flying ability.