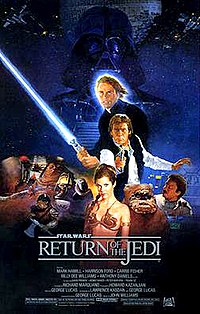 Return of the Jedi (also known as Star Wars: Episode VI – Return of the Jedi is a 1983 American epic space opera film directed by Richard Marquand. The screenplay is by Lawrence Kasdan and George Lucas from a story by Lucas, who was also the executive producer. It is the third installment in the original Star Wars trilogy, the third film to be produced, the sixth film in the "Star Wars saga" and the first film to use THX technology. It takes place one year after The Empire Strikes Back. The film stars Mark Hamill, Harrison Ford, Carrie Fisher, Billy Dee Williams, Anthony Daniels, David Prowse, Kenny Baker, Peter Mayhew and Frank Oz.

A year after Han Solo's capture, C-3PO and R2-D2 are sent to crime lord Jabba the Hutt's palace on Tatooine in a trade bargain made by Luke Skywalker to rescue Han. Disguised as the bounty hunter Boushh, Princess Leia infiltrates the palace under the pretense of collecting the bounty on Chewbacca and unfreezes Han, but is caught and enslaved. Luke soon arrives to bargain for his friends' release, but Jabba drops him through a trapdoor to be executed by a rancor. After Luke kills it, Jabba sentences him, Han, and Chewbacca to death by being fed to the Sarlacc, a huge, carnivorous plant-like desert beast. Having hidden his new lightsaber inside , Luke frees himself and battles Jabba's men, including Boba Fett (who ends up falling into the Sarlacc), while Leia uses her chains to strangle Jabba to death. As the others rendezvous with the Rebel Alliance, Luke returns to Dagobah to complete his Jedi training with Yoda, whom he finds is dying. Yoda confirms that Darth Vader, once known as Anakin Skywalker, is Luke's father, and becomes one with the Force. Obi-Wan Kenobi's Force ghost reveals Leia as Luke's twin sister, and tells him that he must face Vader again to finish his training and defeat the Empire.