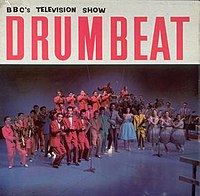 Drumbeat was a BBC television series that aired every Saturday from 4 April to 29 August 1959. It was the BBC's answer and rival to ITV's TV series Oh Boy!, though as the latter finished on 30 May 1959, for most of its run Drumbeat had no comparable competition.